Andrew Yang won’t be on tonight’s debate stage, that may be a problem for his campaign Despite missing the debate, he will remain busy campaigning in Iowa.

Andrew Yang will not be on the debate stage on Tuesday — a blow for the long-shot candidate who surpassed everyone’s expectations and the first major setback of his presidential run.

Yang has outlasted sitting senators, former governors and other seasoned politicians. At the last Democratic debate, the self-proclaimed “non-politician” was the only person of color on stage after other candidates of color, Sen. Cory Booker and former United States Secretary of Housing and Urban Development, Julian Castro, did not qualify. Sen. Kamala Harris had dropped out of the race before the last debate.

After Booker and Castro were unable to participate in the debate due to stringent polling requirements, there were outcries about the lack of diversity among the Democratic candidates.

“For years, we’ve been mocking the Republicans and their lack of diversity, but now we’re faced with the prospect of that happening to our party,” said a person close to Yang’s campaign.

Since Yang failed to qualify, his supporters have been very vocal about their displeasure with the Democratic National Committee and the mainstream media, displaying their frustration online with the hashtag “#YangMediaBlackout.”

Their perception that Yang is ignored by media has led them to turn to tech platforms including podcasts, YouTube and Reddit to discuss and enthuse over their candidate.

Democratic presidential candidate Andrew Yang speaks during a power point presentation at a campaign stop at the Octagon Center For the Arts, Jan. 14, 2020, in Aimes, Iowa. undefined Andrew Harnik/AP

Yang told ABC News he shares their frustration and felt he had earned his spot on the debate stage. He slammed the DNC saying they didn’t show any “flexibility” or “rationality.”

“I want to be on that debate stage,” Yang said. “Right now, the best thing we can do is continue to drive the campaign forward right here in Iowa and New Hampshire, make sure we make the next debate stage, and more importantly, make sure that we have a history-making performance when the voting starts [on Feb. 3]. That’s where my focus is. I understand the frustration. I’m incredibly grateful to everyone who helped get me on every debate stage up to this one. We did earn a spot on this debate stage, too. I think if the DNC showed any flexibility or even rationality, they would see that.”

“This will be the least watched and least relevant debate of any that have preceded it,” Yang’s national press secretary S.Y. Lee, said. “Wedged in right before the start of the impeachment trial in D.C. and still several weeks out from the Iowa caucus, this debate will be forgotten well before Caucus Day.”

Yang’s absence may lead some to question whether he can take his campaign all the way to the White House, said Jessica Levinson, a political commentator and professor of law at Loyola Law School.

“Whether or not people say that they even watch debates or tune into cable news coverage, it now is part of what surrounds this campaign, that he wasn’t able to meet those thresholds,” Levinson says. “I think [that] does lead to questions of viability.

By missing tonight’s debate, Yang may lose a chance at building his support base and reaching new followers, specifically, conservatives disappointed with Trump who may see Yang as a problem solver, and Democratic primary voters who may not be as tapped into the tech spaces as Yang’s most fervent supporters.

Perhaps the biggest consequence from his failing to qualify for the debate is that he loses the appearance of a candidate who seemed almost indestructible. It also makes his team realize that the momentum they’ve seen so far is no longer guaranteed. Yang has persevered through sexual harassment allegations against his staffers, concerns over campaign finance law violations after he accepted large sums of money from JP Morgan and other corporations, and a lack of experience in politics.

“To the extent that there is a mythology around his campaign that’s growing and that he is the kind of an unconventional underdog who keeps plugging away and keeps gaining support, [the debate absence] hurts that story,” Levinson said.

While Yang is a former supporter of Sen. Bernie Sanders, he hasn’t said he’d endorse another candidate. He has said he’d do anything in his power to avoid having President Trump reelected, even if that’s not as president himself. Yang may have to encourage his supporters to vote for another candidate to inspire them to head to the polls rather than sit the election out.

“He will bear a responsibility of saying ‘this isn’t a normal election cycle, the state of our country hangs in the balance,'” says Levinson. “The election will be decided based on people who vote, but don’t know who to vote for or don’t know if they’re going to vote. If he can bring out a few key voters — that can make a difference.”

At a town hall he hosted about autism and his vision of how to support families of children with special needs, a 17-year-old who was recently diagnosed with autism, like Yang’s son, spoke to ABC News about how special he thought it was to have a candidate like Yang speak about the issues important to him.

“It felt like ‘wow this is actually my moment,” Aaron Fennell-Chametzky said. “The fact that I saw Andrew Yang speaking about autism … I’m like ‘They must have went to a laboratory and designed a candidate that fit all of my interests and activism stuff,'” he said.

Yang’s team said despite the candidate not taking part in the debate, he will remain busy campaigning in Iowa.

“Andrew Yang is going to continue meeting and speaking with Iowans where they are, holding three town halls today and tomorrow, including one tonight at the debate venue. [He] is going to keep campaigning as we remain laser-focused on Feb. 3 and the contests beyond Iowa,” said Lee. 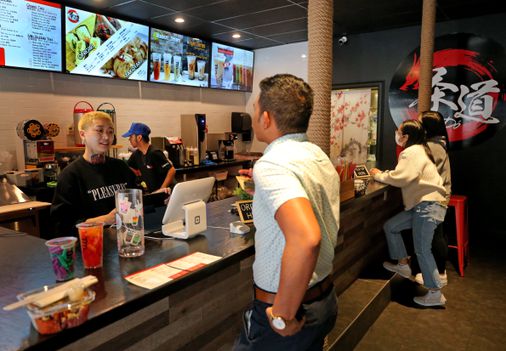 www.bostonglobe.com: ‘There are opportunities up here.’ Downtown Lowell draws a melting pot of entrepreneurs

michael-hudson.com: The End of Western Civilization

Race in America, Social Justice, The World
Read Full Article Here: https://michael-hudson.com/2022/07/the-end-of-western-civilization/ What did not seem likely 2500 years ago was that a warlord aristocracy would conquer
Read More